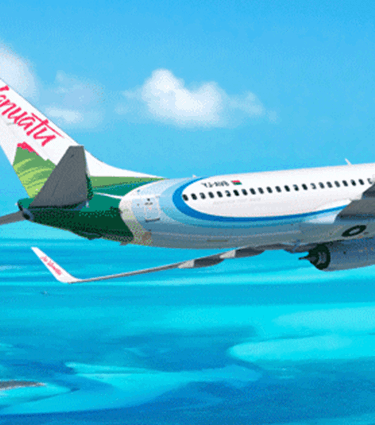 “We’re proud to be the launch airline in the Pacific region for the Airbus A220” said Air Vanuatu’s Chief Executive Officer Derek NICE. “These aircraft will be deployed to operate our current international and domestic network, including our newly announced non-stop Melbourne-Port-Vila service, and will bolster plans to expand our network to new destinations throughout the South Pacific”.

“I am delighted to see Air Vanuatu taking the next step in implementing our shared vision, which sees 300,000 annual holiday visitors to Vanuatu by 2030,” said Bakoa Kaltongga, Chairman of the Air Transportation and Tourism Task Force. “I know the entire hospitality sector will welcome the additional capacity that will be created by the arrival of these new aircraft, beginning in 2020.”

"Vanuatu Tourism Office’s Chief Executive Officer Adela Issachar Aru welcomes the new aircraft acquisitions, emphasizing that they will enhance the overall experience for tourists travelling to Vanuatu. “Air Vanuatu’s new A220 aircraft feature wider seats, more legroom and bigger windows. They will be a wonderful introduction for Vanuatu’s international travelers to our unique brand of hospitality and island spirit. These new Air Vanuatu aircraft will assist VTO to attract more international visitors from our key overseas markets by providing a competitive and enjoyable customer experience.”

The A220 will introduce more than a superior passenger experience. With its advanced technology, it will bring much greater fuel efficiency and lower noise levels, demonstrating Air Vanuatu’s respect for the environment, and can be economically operated on domestic services, regional routes and into the new long-haul markets that are key to Air Vanuatu’s growth plan.

“We are delighted by this announcement,” said Jason RAKAU, Chief Executive Officer of Airports Vanuatu Ltd (AVL). “This is another concrete step in implementing the 2030 shared vision between the Vanuatu Tourism Office, Air Vanuatu and Airports Vanuatu Ltd, and gives us even more confidence in the airport upgrades we’re planning in Port Vila, Santo and Tanna”.

Air Vanuatu is expecting the first Airbus A220 delivery in June 2020. The airline has purchase rights for four additional aircraft, which give it the potential to increase its order to eight aircraft in total.

Air Vanuatu operates seven international routes with daily flights from Sydney and four flights a week from Brisbane, including two direct flights to Espiritu-Santo. As of 17 June 2019, the national carrier will offer six flights a week from Auckland and three non-stop services from Melbourne. Codeshare services also include respectively six and seven weekly flights to New-Caledonia and Fiji in partnership with Aircalin and Fiji Airways, with other connections to Port Moresby and Honiara operated by Air Niugini and Solomon Airlines.